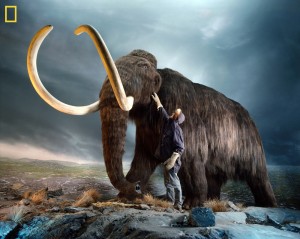 PERMITTED USE: This image may be downloaded or is otherwise provided at no charge for one-time use for coverage or promotion of National Geographic TEDxDeExtinction Event and the National Geographic magazine feature dated April 2013. No copying, distribution or archiving permitted.  Sublicensing, sale or resale is prohibited.

REQUIRED CREDIT AND CAPTION: All image uses must be properly credited to the relevant photographer, as shown in this metadata, and must be accompanied by the provided caption. Any uses in which the image appears without photographer credit and a caption referencing NGM and/or TEDxDeExtinction are subject to paid licensing.

You MUST follow these requirements if using the images:

007:
Photo by Jonathan S. Blair/National Geographic
A museum worker inspects a replica of a woolly mammoth (Mammuthus primigenius), a species that went extinct 3,000 to 10,000 years ago. In March 2012, scientists in Russia and South Korea announced a partnership to try to clone the mammoth and generate a living specimen

This site uses Akismet to reduce spam. Learn how your comment data is processed.