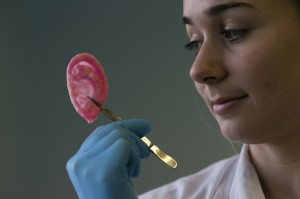 Dr Michelle Griffin, a plastic research fellow, poses for photographs with a synthetic polymer ear at her research facility in the Royal Free Hospital in London, Monday, March 31, 2014. In a north London hospital, scientists are growing noses, ears and blood vessels in the laboratory in a bold attempt to make body parts using stem cells. It is among several labs around the world, including in the U.S., that are working on the futuristic idea of growing custom-made organs in the lab. While only a handful of patients have received the British lab-made organs so far including tear ducts, blood vessels and windpipes  researchers hope they will soon be able to transplant more types of body parts into patients, including what would be the world’s first nose made partly from stem cells. “It’s like making a cake,” said Alexander Seifalian at University College London, the scientist leading the effort. “We just use a different kind of oven.” (AP Photo/Matt Dunham)

This site uses Akismet to reduce spam. Learn how your comment data is processed.